The Chanel Canvas sneaker is one gorgeous  pair of shoes from the Chanel Spring/Summer 2009 Shoe Pre Collection. This Chuck Taylor reminiscent sneaker is in canvas with a Chanel logo and a two tone rubber sole with a 10 mm heel. All I can say is- this is exactly what every woman needs, a luxurious casual shoe with the right color and design. No word on the price yet but we’ll keep you updated. Until then keep your eyes peeled and your wallet sealed.

Here are some pictures from the Louis Vuitton Spring/Summer Women’s Shoe Collection. What do you think? 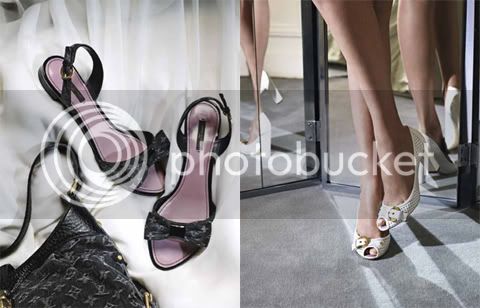 Here are more pictures of the very unique “Blow” sunglasses introduced by Kris Van Assche at the Men’s Spring/Summer 2009 Dior Homme show.  No word on the price yet but only 500 of each color will be available to the world. So these are going to be pretty exclusive when they drop in April.

Stay up-to-date with UpscaleHype and get the latest celebrity fashion and lifestyle news.

Never Gonna Get It: Aston Martin One-77

When you think of luxury sportscars one of the first vehicles that comes to your mind is the untouchable  Aston Martin. As the global economic recession unveils its ugly head you would expect companies to take that into consideration before they release anything new. However it seems as though the British automakers of this one of kind car are blatantly ignoring the elephant in the room and continuing forward with a business as usual attitude by introducing the Aston Martin One-77.

Okay people now it’s time to really get serious. It’s fun hallucinating about this car but, to be brutally honest, unless you’re flat out rich there’s  no point wasting your thoughts. If you’re an ordinary person, not to sound mean but, there are 2 reasons why you need to completely ignore everything you just read. 1.The Aston Martin One-77 is exclusively limited to only 77 buyers worldwide, that means the chances of even the rich getting one is greatly reduced 2. Now this is the big one, the One-77 cost a fortune, so if your not wealthy the only way you’re ever going to drive this car in real time is if you scuba dived deep into the seas of the Caribbean, found an old shipwrecked pirates ship, and recovered all the millions of dollars worth of undiscovered treasures below. If you’re an average person that receives an average income and you don’t fulfill the above criteria, sorry to say this but you are NEVER GONNA GET THIS CAR. Price Tag: $2,300,000.

However if you are wealthy check out the videos below

Here are some pictures from the Louis Vuitton Spring/Summer 2009 Men’s Shoe Collection. What do you think?

Yves Saint Laurent launched their Autumn/Winter 2009/10 Homme Mens Collection in Paris with a short film starring American actor/musician Michael Pitt who is most known for his roles in “Murder By Numbers” and “The Dreamers”. Michael Pitt was chosen by YSL  designer Stefano Pilati to play the part of the silent male who expresses his subtle reactions to a French woman’s seductive compliments of his body and outfit. Shot in a black & white close-up by Inez van Lamsweerde and Vinoodh Matadin the short film intends to reveal the autumn/winter 09/10 YSL mens collection through alluring revelations. Although he doesn’t know what she’s saying, I’m sure he know what she wants.

Check Out The Video below

Here are some pictures from the Tom Ford Spring/Summer 2009 Menswear Collection with Spanish model Jon Kortajarena. I have to say I’m lovin’ this collection because of the fine cut slim fitted outfits and the dynamic color combination. It seems that Tom Ford truly knows what he’s doing.